Do you have fine lines or pores you’d love to mask?  How about wishing for your makeup to stay in place longer or get rid of face shine?   All these problems can be solved by using a primer.   A primer will not hide imperfections that a concealer would – such as redness or if you have a pimple.   But a good primer can make all the difference.   I think primer is one step women over 40 should not do without.

Hourglass makes an incredible primer called Veil Mineral Primer, and it’s one of their best selling products in the Hourglass line and I can see why.   I’ve been testing this primer and instantly became hooked.   I have tried several primers and some I just didn’t like – Becca and Korres made my skin oily even though they said they were “mattifying”.   Nars and Laura Mercier primers just felt like I was putting another layer of moisturizer on my face.   Smashbox was good, but the last two times I’ve bought it, it was “funky” and I don’t know if they changed the formula or not.

Hourglass Veil Mineral Primer has SPF 15 – huge plus, and it leaves your skin with this velvety soft cushion between your skin and your makeup so makeup goes on incredibly smooth.  It also didn’t leave my skin oily after a few hours like others have.  My skin just felt like nice, soft skin.  Hourglass does not have parabens, sulfates, synthetic fragrances or dyes or phthalates.

To show you what the difference a primer can make, I took a photo of my skin without any makeup (ahh!) before I applied primer and then with the primer – still sans makeup.

Before above, after below 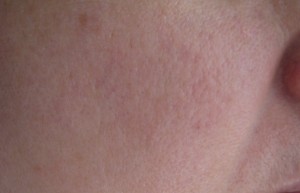 Notice the texture difference of my skin.   As I said – primer doesn’t change discoloration or hide things like age spots or pimples, but look at the smoothness and my pores seem to disappear.  Makeup application becomes effortless with a primer, and Hourglass Veil Mineral is one I will keep in my makeup bag.    It’s available at Sephora and Sephora.com for $52.